Reported STDs at Unprecedented High in the U.S.

Expanded prevention efforts needed in light of increases, especially for those at greatest risk

Total combined cases of chlamydia, gonorrhea, and syphilis reported in 2015 reached the highest number ever, according to the annual Sexually Transmitted Disease Surveillance Report released today [October 19, 2016] by the Centers for Disease Control and Prevention (CDC).

“We have reached a decisive moment for the nation,” said Dr. Jonathan Mermin, director of CDC’s National Center for HIV/AIDS, Viral Hepatitis, STD, and TB Prevention. “STD rates are rising, and many of the country’s systems for preventing STDs have eroded. We must mobilize, rebuild and expand services – or the human and economic burden will continue to grow.” 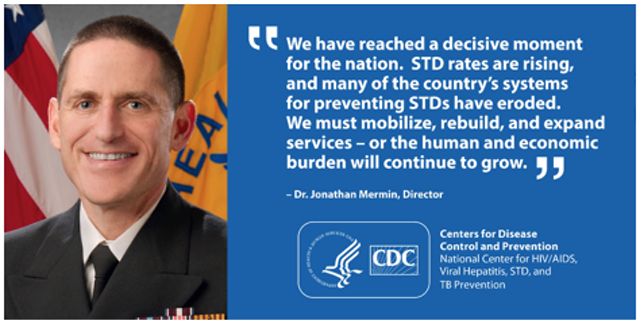 In recent years more than half of state and local STD programs have experienced budget cuts, resulting in more than 20 health department STD clinic closures in one year alone. Fewer clinics mean reduced access to STD testing and treatment for those who need these services.

Young people and gay and bisexual men continue to face the greatest risk of becoming infected with an STD, and there continue to be troubling increases in syphilis among newborns. 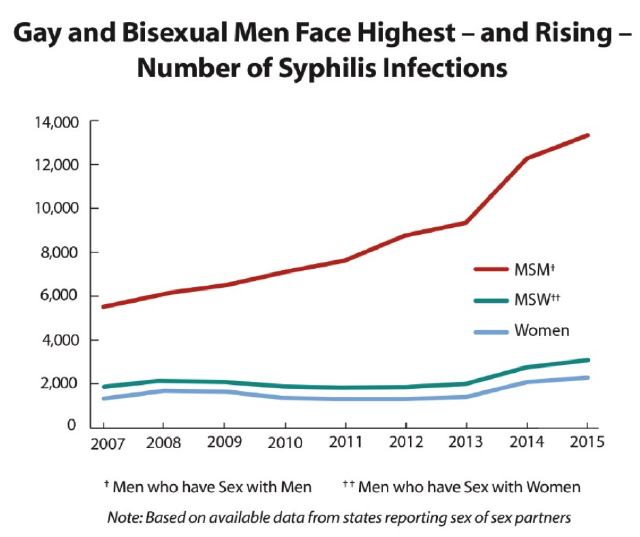 “The health outcomes of syphilis – miscarriage, stillbirth, blindness or stroke – can be devastating,” Dr. Gail Bolan, Director of CDC’s Division of STD Prevention, said. “The resurgence of congenital syphilis and the increasing impact of syphilis among gay and bisexual men makes it clear that many Americans are not getting the preventive services they need. Every pregnant woman should be tested for syphilis, and sexually active gay and bisexual men should be tested for syphilis at least once a year.”

To prevent and control STDs, CDC provides support to state and local health departments for disease surveillance, contact tracing and health promotion, and other critical services. CDC also issues and maintains testing and treatment guidelines for providers so individuals get the most effective care. Maintaining and strengthening these and other STD prevention systems will be essential to respond to the recent increases.

“STD prevention resources across the nation are stretched thin, and we’re beginning to see people slip through the public health safety net,” said Dr. Mermin. “Turning the STD epidemics around requires bolstering prevention efforts and addressing new challenges – but the payoff is substantial in terms of improving health, reducing disparities and saving billions of dollars.”

An effective national response to the STD epidemic requires engagement from many players:

The above message comes from CDC, who is solely responsible for its content.

You have received this email because you requested follow-up information to an Epocrates DocAlert® message. For more information about Epocrates, please click here.