An unsuspected cause of chronic diarrhoea

Parasitological stool examination was non-diagnostic, with normal stool pH. Coproparasitological study was negative; stool specimens for faecal leucocytes, bacterial culture, ova and parasites were all negative and pH was normal. Occult blood was found repeatedly in the stool.

Chest x ray and barium follow-through were all normal. Upper endoscopy with gastric and duodenal mucosal biopsies was unremarkable. Colonoscopy was difficult and performed only up to the mid-sigmoid colon because of poor luminal distension due to perivisceral phenomena resulting from previous diverticulitis. Double-contrast barium enema was therefore used to evaluate the colon, but did not yield significant findings. Abdominal ultrasound showed widespread abnormalities with ileal loops and moderately dilated, fluid-filled jejunal loops with oedematous wall thickening (fig 1). A few small (12mm) peri-intestinal lymph nodes were detected. Localised peritoneal fluid was present in the right iliac fossa. Despite extensive investigations the diagnosis remained uncertain.

Question
How would you explain the clinical context and sonographic findings and what further diagnostic procedures you would like to perform?

Although other imaging modalities, particularly barium x ray studies, are normally used to evaluate the small bowel, in this case ultrasonography plays an interesting part in that it is able to detect some pathological features such as wall thickening, loop dilatation, localised peritoneal fluid and mesenteric lymphoadenopathy. The ultrasonographic findings are not pathognomonic, but taken together with the clinical context and biological tests may lead to a suspicion of a malabsorption condition.

Capsule endoscopy was performed because gastrointestinal complaints were persistent and suggestive of enteropathy. Capsule endoscopy showed swollen mucosa at the proximal small intestine [(fig 2A,B)]; moreover, it highlighted some whipworms in the terminal ileo-caecal valve, with the appearance of Trichuris trichiura, one of the major nematode species affecting the human bowel; the mucosa in the caecal region was patchily erythematous [(fig 2C,D)]. The videocapsule had temporarily followed slow and whip-like movements of some worms. 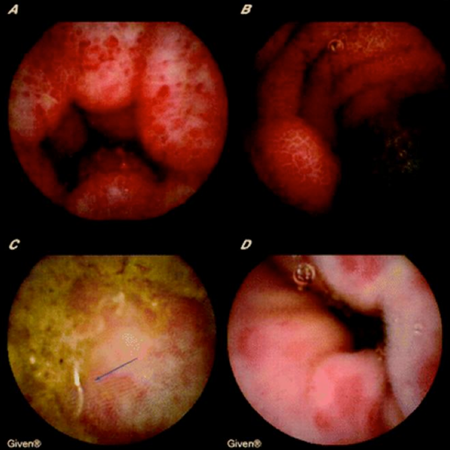 [Figure 2] Capsule endoscopy showed swollen mucosa in the proximal small intestine (A,B); moreover, it captured some images in the terminal ileo-caecal valve, where there were whipworms with the appearance of Trichuris trichiura, one of the major nematode species affecting the human bowel; the mucosa in the caecal region was patchily erythematous (C,D).

The patient was treated with a course of mebendazole and short-term iron supplementation, showing rapid clinical improvement.

Thus, capsule endoscopy may be decisive in the management of patients with inexplicable chronic diarrhoea.

The above message comes from BMJ, who is solely responsible for its content.